Sir David King, former chief scientific adviser to the UK government and now the special representative for climate change, said: “Technology is moving ahead very rapidly. I think we need to focus not only on the details of the negotiations, but also on what the technological revolution is going to bring to us.”

He cited as an example new biofuels technology that can turn agricultural waste into ethanol, and uses the methane produced as a byproduct to power the factory in which it is created. If this were “translated” to be used widely in China, for instance, the potential would be “massive … enormous”, he said.

As the world’s governments gear up for the Paris talks, Sir David said the UK was “leading the world” in climate diplomacy, forming close associations with other governments and among officials as a key focus of the Foreign Office’s efforts. He said the foreign secretary had “protected” the budget for this diplomatic push against swingeing cuts that have affected other parts of the department.

At Paris, governments are hoping to forge a new global agreement on the climate that would set national targets for curbs on greenhouse gas emissions after 2020, when current targets run out. Governments are scheduled to produce their targets this month, with Switzerland last week becoming the first nation to submit its proposals to the UN.

The European Union, China and the US have also publicly set out proposals, though these have yet to be formally codified into the UN process. The EU has pledged to cut emissions by 40% relative to 1990 levels by 2030, while China’s emissions will peak by 2030 and the US will cut greenhouse gases by 25% to 28% by 2025.

Professor Qi Ye, a leading Chinese adviser on energy policy, added that China’s emissions might peak sooner as the hope was for a peak year “around 2030”, and that the country was moving ahead rapidly on renewable energy, energy efficiency, nuclear power and reducing coal consumption, which fell by 3% last year partly because of slowing economic growth but also from the effects of policy.

He pointed to recent adverse publicity on air pollution, which is a major problem in Chinese cities and was recently highlighted by Chai Jing in a much-seen internet video, and that this would also provide a strong spur to cleaning up greenhouse gas emissions. This approach, of emphasising the “co-benefits” to health from dealing with climate change as well as air and water pollution, was gaining ground, he said.

Diplomacy is stepping up in the lead-up to the crunch talks later this year. Todd Stern, the US envoy for climate change, told journalists last week it was important not to make snap judgements on the outcome of the Paris talks, the effects of which he said would take several years to be felt. He warned that Paris was a crucial stage for global negotiations on a new climate agreement: “With as much teed up as is teed up now, if the thing really were to not get over the finish line, I think that would be a consequential thing for the UN. But I don’t think that’s going to happen.”

Prof Qi and Sir David were speaking at an IPPR event in central London on Tuesday. 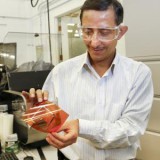